HOW MUCH? $450 Million dollars to renovate 13 schools

FOR WHAT? Heating/AC, plumbing, facilities upgrades. Priorities are facilities that are over 40 years old, next those over 30 years old, then newer facilities at the following campuses:

This is a proposal by SAISD to raise $32.1 million of additional school funding that can go to operating costs, like expanding after-school and summer school programs, increasing wages for the lowest paid employees, and upgrading technology in classrooms. The proposal would generate

*It could increase hours and wages for support personnel—put workers on a pathway to a living wage
*It would increase attendance of after-school and summer school from 5,000 to 20,000 students

WHAT IT WILL IT COST TAXPAYERS

* Example: If your house is valued at $70,000, your monthly bill will increase by an average of $7.59/month, or about $91 the first year, and will increase gradually for the following 4 years. If you have an over-65 exemption, your taxes won’t be affected by either of these proposals.

Because public schools are funded through property taxes, only the taxes of property owners will be directly affected. 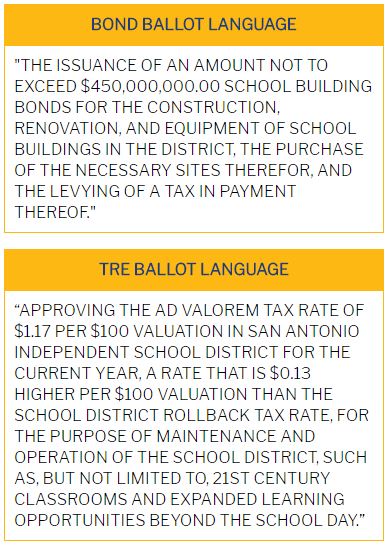