In case you missed the November 21, 2014 installment of Texas Week with Rick Casey on KLRN-TV, or if you want to review or share it, the episode with COPS/Metro leader Mike Phillips discussing the Living Wage campaign with host Rick Casey and former City Council member and SAW Board member Reed Williams is now online.

Tuesday morning, leaders from COPS and the Metro Alliance were joined by Bexar County Judge Nelson Wolff on the steps of the Bexar County Courthouse in support of a three part strategy proposed by COPS/Metro to raise wages for the lowest paid workers in the county, as well as those working for county contractors. Later in the morning, COPS/Metro leaders formally presented the strategy to the commissioners.

At 10:30 AM during the County Commissioners meeting, COPS/Metro leaders asked the Commissioners to raise wages for the lowest paid county workers from the current floor of $11.67 an hour to $14.91 over a three year period. They also asked Commissioners to put the wages of people employed by county contractors on par with the current county living wage. The third strategy laid out by leaders was to close a tax loophole to require that all businesses applying for tax incentives of any kind abide by the current Economic Development guidelines regarding wage floors.

After hearing the presentation, Judge Wolff spoke favorably to all three pieces of the strategy. He directed the County Manager to research how to implement a plan that would raise the current minimum wage from $11.67 an hour to $13 an hour by next year. The County Manager will work with COPS/Metro leaders on an initial plan to be presented at Commissioner’s Court in early January 2015.

COPS/Metro leaders hope the County's willingness to look into the issue will encourage other employers, including the City of San Antonio, the Alamo Colleges, school boards and hospital district to consider raising wages.

Leaders of COPS/Metro will hold a press conference on the north steps of the Bexar County Courthouse on Tuesday, November 18 at 9:00am to announce a Living Wage strategy for the lowest paid County workers and for outsourced & subcontract service jobs. County Judge Nelson Wolff will join COPS/Metro leaders, who are also scheduled to make a formal presentation during
the Commissioners Court meeting later that morning.

“The unemployment rate in San Antonio is less than 4.7%,” remarked Esmeralda Rodriguez, a St. Timothy parish member, during the assembly. “That means that the vast majority of us are working, and we’re working very hard, sometimes multiple jobs. The problem is that many people are not being paid enough to make ends meet.”

Did you know that 1 out of 5 people in San Antonio lives in poverty?

Even worse, 1 in 3 children is growing up in poverty in San Antonio. Many families are working very hard and still not earning enough to make ends meet. In response, leaders from C.O.P.S. and the Metro Alliance have launched a campaign to raise wages for many of the lowest paid workers in San Antonio.

Click here to sign up to support the Living Wage and Economic Security Campaign! By signing up, you will also receive news and updates about our progress with the campaign.

Want to learn more about wages? The City budget? Other economic pressures on our families? Attend a civic academy at an institution near you. Click here for a list of civic academies on Living Wages and Economic Security.

In order to build a strong base of support, C.O.P.S. and the Metro Alliance will have a Fall Assembly for leaders and allies. Click here for a flyer for our Fall Assembly on November 16, 2014, 4 PM at Sacred Heart Church Civic Center, 2123 W. Commerce St. 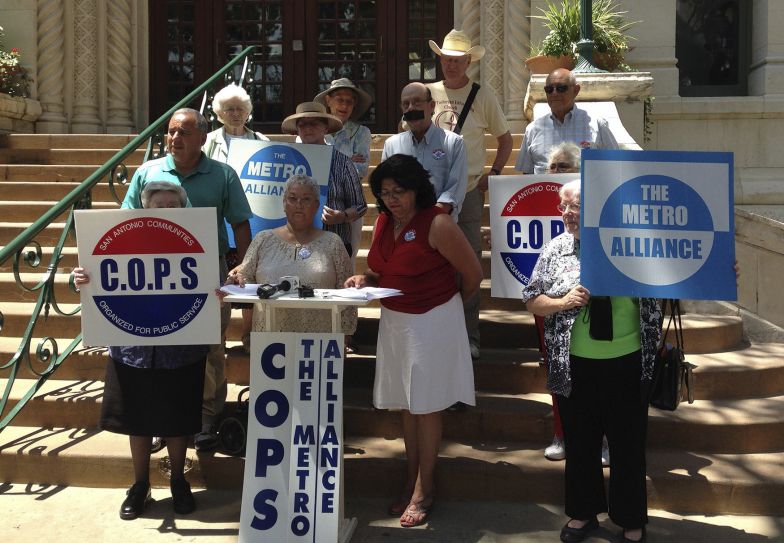 Clergy and leadership from Methodist, Presbyterian, Episcopal, Lutheran, Catholic and Muslim congregations of COPS / Metro delivered a joint statement calling on the President and Congress to demonstrate hospitality to children arriving on the border from Central America.

“Don’t send them back as if they were animals,” argued Fr. Walter D’Heedene of Sacred Heart Catholic Church. Speakers underscored that each child should have an attorney, get thorough processing (accorded in the 2008 Wilberforce Act) and have more exposure to vetted religious and social service organizations so that they do not become isolated.

COPS / Metro Alliance is one of five Texas IAF organizations calling on Congress to preserve the protections that currently exist for Central American children.

(Jul-1-2014) Message to the White House regarding the massive influx of refugees–minors and young families–arriving from Central America and Mexico:

We have all been deeply moved by the images of the young mothers, children and adolescents now detained under miserable conditions at our southern borders. They are clearly refugees, fleeing the drug wars in homelands now boasting the highest murder rates in the world.  We must honorably meet our international obligations to grant these people safe and humane shelter here. We Americans are all immigrants or descendants of immigrants. This is our national heritage.

We do not take lightly our government’s concerns for national security or the orderly control of immigration affairs. However, the solution does not lie in punishing the victims. Instead, we strongly urge immediate action on the following measures:

COPS/Metro Alliance leaders & allies kicked off their Living Wage Campaign on Tuesday morning at the Bexar County Commissioners Court, asking elected officials to raise the county's minimum wage, currently set at the Federal Poverty Level. In response, Judge Wolff asked the County Manager to immediately begin a study of the wage scale and to meet with a COPS/Metro delegation within 7 days.