On Thursday September 10th, at the urging of COPS / Metro Alliance, San Antonio city council members unanimously voted for a living wage increase from $11.47 to $13.00 per hour, benefiting 1,300 of their lowest paid workers.  By doing so, the municipality joined Bexar County in their living wage increase.  Just ten days prior, Bexar county commissioners voted to increase their lowest wage to $13 / hour.

Not resting on their laurels, two weeks ago COPS/Metro leaders won a 47% increase in city funding for Project QUEST, a nationally recognized workforce training program started by the organization 23 years ago.

While this concludes an exciting year of action — which also resulted in raised wages for workers at Alamo Colleges —COPS / Metro leaders are not planning to rest long.  Our long-term wage strategy includes a push to increase municipal wages to $14 / hour in fiscal year 2017 and $15 / hour the year after.  On Monday, November 8, 2015, we'll kick-start our campaign to raise wages in public schools and hospital districts. 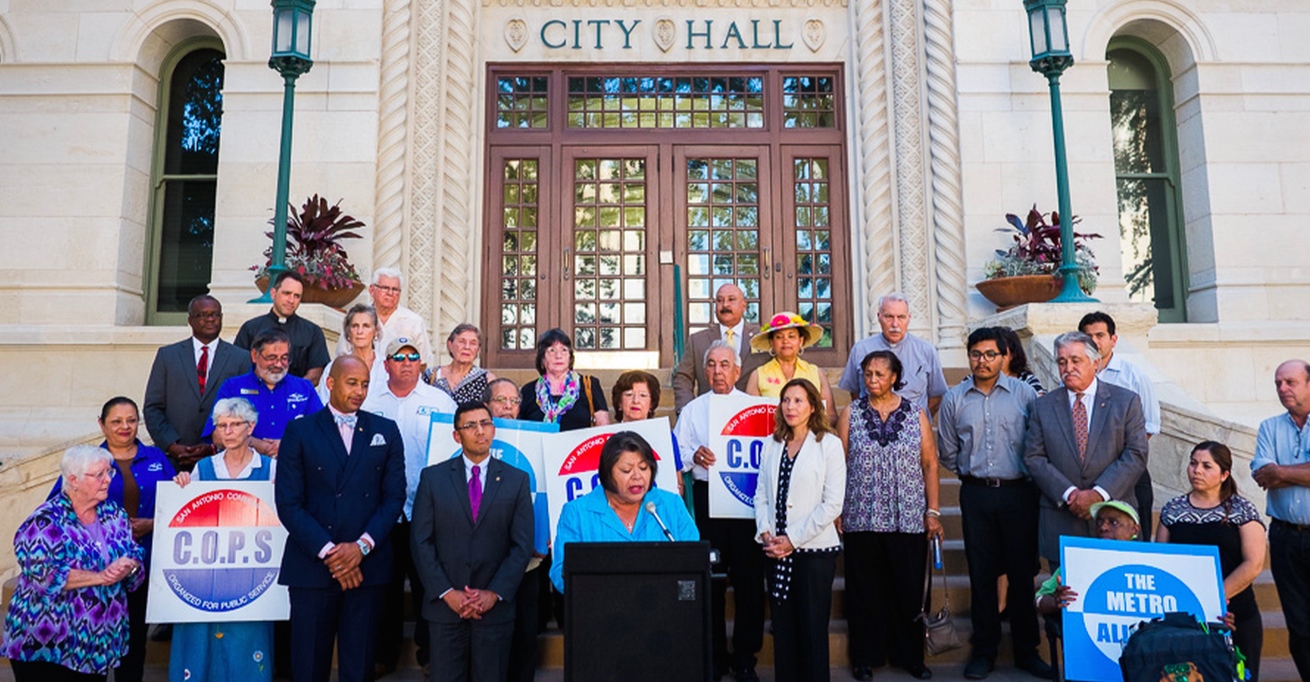 City employees on the way to a living wage

Check out recent coverage of COPS/Metro’s efforts in working with the City Manager and Council in raising the bottom wages of City of San Antonio workers:

Where do the Mayoral Candidates Stand on our Agenda?

COPS/Metro leaders have asked candidates for mayor to stand with us on our agenda to increase the living wage for public sector workers, invest in Project Quest and other workforce development strategies, and fund housing rehabilitation, especially for seniors.

Want to know where they stand? Here is an article about our recent assembly from Channel 4 News.

In late December 2014, the San Antonio Express-News Editorial Board outlined several issues for the state and local government to tackle in 2015. They noted: "C.O.P.S./Metro Alliance has been waging a living-wage campaign in San Antonio, prevailing on city and county government leaders to pay their lowest-paid employees and contractors a decent wage, That means beyond minimum wage. The group got a good reception when making its pitch to Bexar County commissioners recently."

On January 18, 2015, the San Antonio Express-News published "Tax dollars should support living wages," credited to COPS/Metro leaders Fr. Steven Gamez and Sr. Consuelo Tovar. They made the case for #LivingWages and quoted the Rev. Martin Luther King, Jr.'s last speech: "It is a crime for people to live in this rich nation and receive starvation wages."

At 40, COPS still standing up for residents

The commentary, "At 40, COPS still standing up for residents," by the first president of Communities Organized for Public Service (COPS), Andres "Andy" Sarabia, reflects on the organization's accomplishments during its first 40 years. This article appeared on page F6 in the Sunday, December 7, 2014 San Antonio Express-News.