COPS/Metro representatives will be making the rounds with City Council staffers this week, pushing for a rent-control measure to reduce the stress weighing down working families during the COVID-19 outbreak.

With stay-at-home policies shutting down much of our business activity, the biggest victims have been hourly workers, many of whom have been employed in sectors (namely the service industry) where working from home is not an option, and where the money to meet payroll has dried up.

The problem is most acute for undocumented immigrants, whose jobs have been among the first to go, and who don’t have access to the kind of safety-net programs that are temporarily keeping others afloat.

[Specifically,] COPS/Metro is proposing an ordinance that would prohibit residential property owners from charging late fees for nonpayment of rent for the duration of the emergency disaster period declared by Gov. Greg Abbott. (The alliance’s draft ordinance would make this policy retroactive to March 13, the date that Abbott issued his initial disaster declaration.)

COPS / Metro focuses on arming residents through community organizing, and [Rev. Frédéric] Mizengo has been handed the baton to continue that legacy.

When Archbishop Gustavo García-Siller shuttered the archdiocese’s churches in mid-March to help stop the spread of COVID-19, Mizengo began live-streaming a daily Mass on the church’s Facebook page.

He used his iPad and invited a group of about 10 people, including readers and singers, to the church’s 450-seat sanctuary. To a great degree, they’ve practiced social distancing.

Mizengo hasn’t been alone in noticing the number of those watching, which has reached 400 at times.

It’s Holy Week, when church attendance normally rises everywhere, but some worshipers from outside of San Antonio have left comments on the parish’s page, too, and have kept tiny heart and thumbs-up icons floating on the page.

The parish already had seen growth, as Mexican and Mexican Americans from throughout the city heard of Mizengo’s preaching style....

The funeral of Andres "Andy" Sarabia, the first president of COPS, was held Tuesday, May 14, 2019. Livestream video coverage was provided by NOWCastSA.

From the Archives: COPS Launched Efforts in 1974 to Improve Basic City Services

The group won the support of Mayor Charles Becker, who worked to pass a $46.8 million bond issue to fund long-neglected drainage projects on the West Side.

With a power base that was rooted in Catholic parishes, COPS members focused their anger in a positive way, remaining vocal but never violent, and brought lasting change.

[In photo: Candidates for District 6 listen to a question in a 1983 COPS “accountability session.” Staff File Photo, San Antonio Express-News] 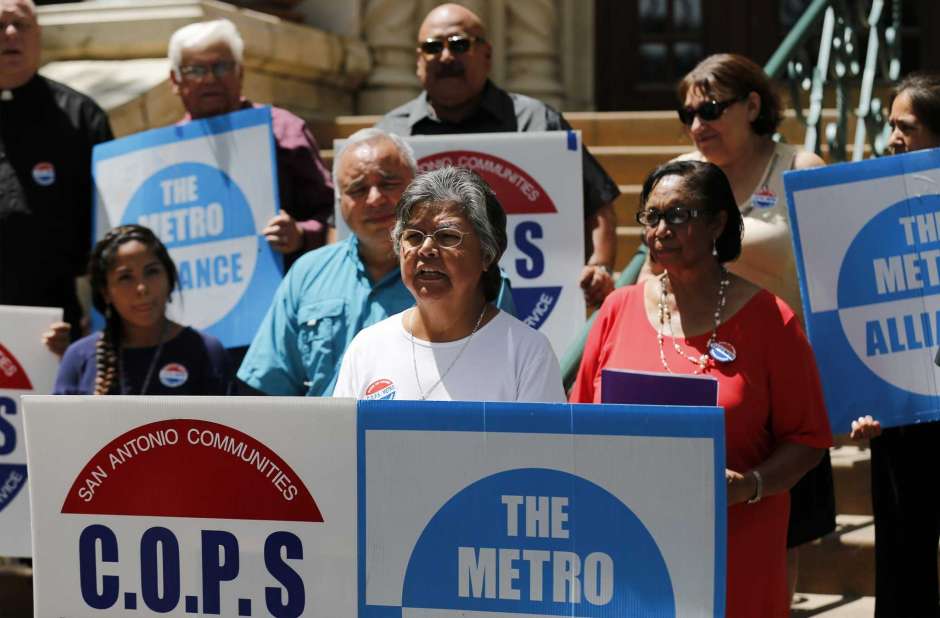 Project QUEST, the nonprofit workforce development organization created more than a quarter-century ago by the COPS/Metro Alliance, has been awarded a $1 million grant that the organization says will allow it to serve more San Antonians with expanded job training programs.

The award comes from the Rockefeller Foundation and Chan Zuckerberg Initiative as part of their Communities Thrive Challenge, which awarded $1 million each to 10 organizations across the nation, working to “help low-income and financially insecure people find and retain well-paid, meaningful work, achieve financial security or build economically vibrant neighborhoods.”

COPS/Metro Leader: Schoolyard Eyesore at Beacon Hill Is Not Putting Our Kids First 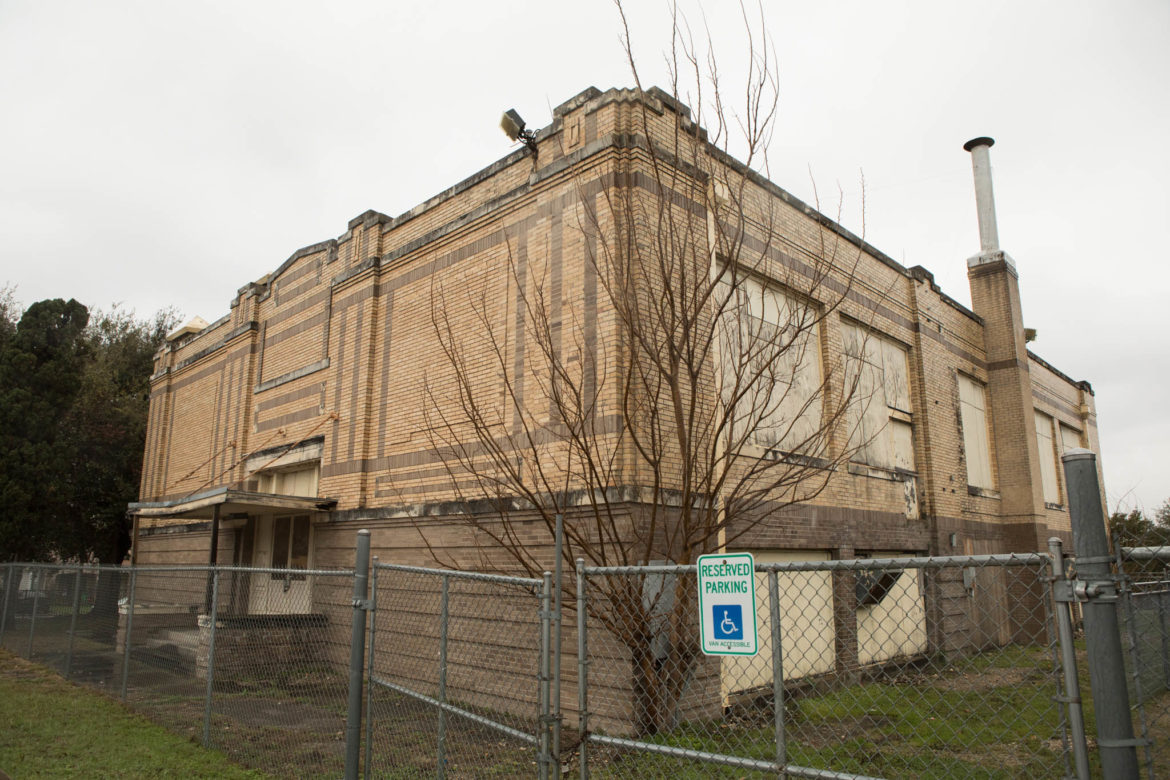 [Excerpt below from Oped by Amanda Gonzales]

In August, my kids went back for another year at Beacon Hill Dual Language Academy in the shadow of a crumbling, vacant school building abandoned 20 years ago. Old pipes stick out of the wall, as if they just sawed the school in half and left it. The windows and doorways are boarded up. This deteriorating building tells our children that they deserve to live in blight.

Last year, an architectural study found that the building was in danger of falling on the playground. San Antonio ISD wisely fenced it off to protect our children. But every day my kids ask, “Mommy, when can we play on the playground?” And every day I answer, “I’m working as I hard as I can to get your playground back.” This is unacceptable. It is time to put kids first.

Schoolyard Eyesore at Beacon Hill Is Not Putting Our Kids First, Rivard Report 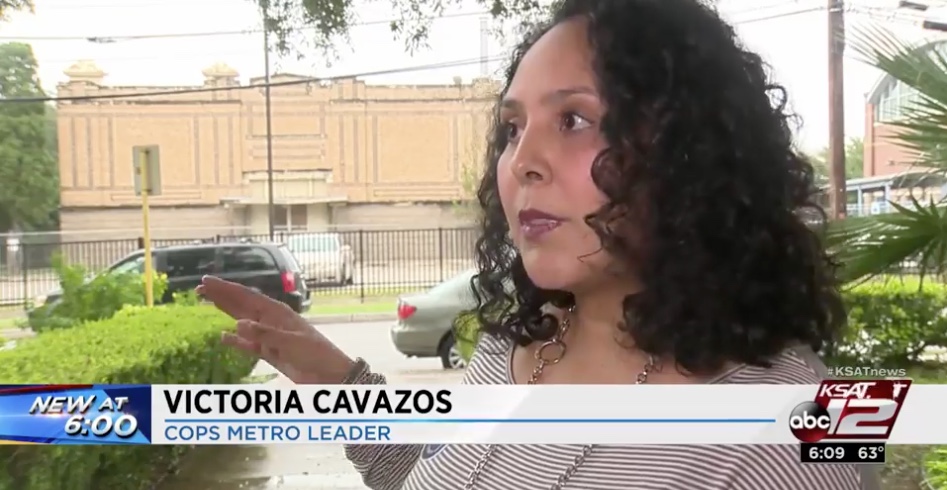 Victoria Cavazos, of Communities Organized for Public Service Metro Alliance, has a daughter in kindergarten at Beacon Hill Academy. Cavazos said the old building is not only cutting into the children's green space, but as of April, the children haven't been allowed to use the playground.

SAISD spokeswoman Leslie Price said the district has no need for the building and it would be extremely expensive to restore. In fact, the district has requested a demolition permit from the city.

"We'd really like to demolish the building to give children the space that they deserve," Cavazos said.

"We've worked with a lot of different people and a lot of groups to try and get that money," said Michelle Ricondo, of COPS Metro Alliance. "But no one has come forward with the money to renovate the building." 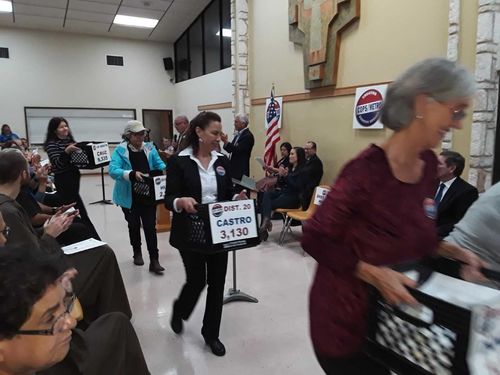 [COPS / Metro Alliance] hosted a town hall at Our Lady of Guadalupe Catholic Church in Helotes, and invited Republican and Democrat incumbents and challengers for state and Congressional offices that represent West Bexar County and San Antonio’s south and west sides to attend and publicly state their positions on four issues: restoring Texas public school funding; immigration reform; reining in the “payday lending” industry; and increasing job training and re-training programs for displaced workers and in historically under-served areas....

Mendoza says COPS/Metro Alliance decided to become active in more conservative, affluent suburban communities outside the city's inner and outer freeway loops because emerging economic and social challenges are not defined by geography or political affiliation.

With the 2018 midterm elections less than three weeks away, COPS/Metro Alliance today launches a get-out-the-vote phone banking and canvassing initiative....

COPS / Metro Says "Vote No" on Prop A

This fall, the biggest loser of the amendments proposed by the firefighters union will be local democracy. While much of the rhetoric focuses on the city’s AAA bond rating and its capacity to govern, COPS/Metro is primarily concerned about the loss of San Antonio’s democratic capacity.

COPS/Metro — a coalition of congregations, schools and unions working together on behalf of families — asked the city to drop the lawsuit on the evergreen clause and firefighters to drop the petition drive and return to the negotiating table. Neither side moved, and now the residents and voters of San Antonio are caught in the crossfire between “Go Vote No” and “Vote Yes” on the three charter amendments.

At its core, democracy is about negotiation and compromise... 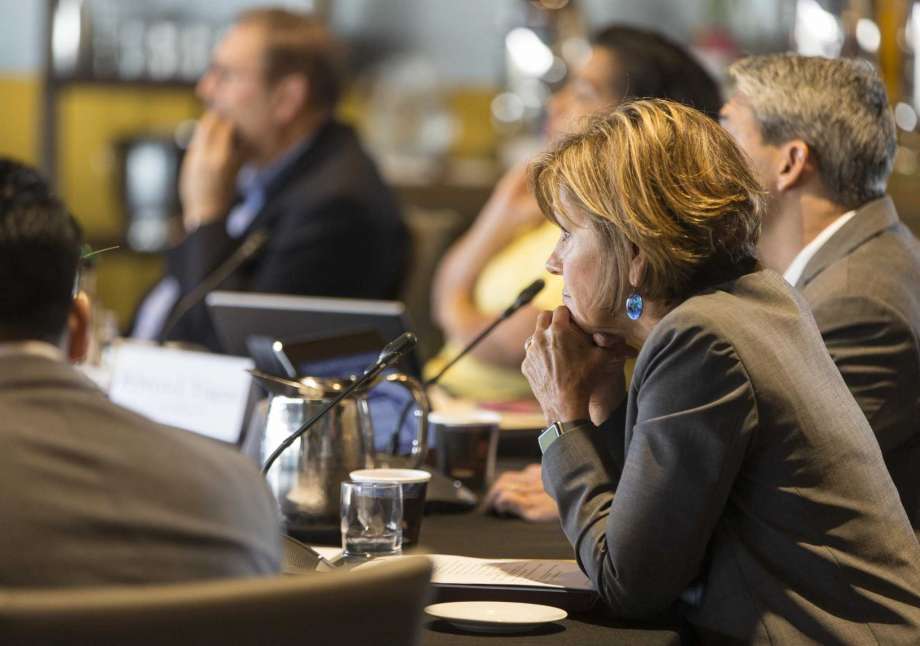 For the first time in city history, the lowest-paid municipal workers are set to begin earning $15 an hour — a major victory for COPS/Metro Alliance, which has been advocating for a living wage for several years.