Here are some photos and video from the November 16, 2017 Sign Up & Take Charge Kick-Off Assembly: 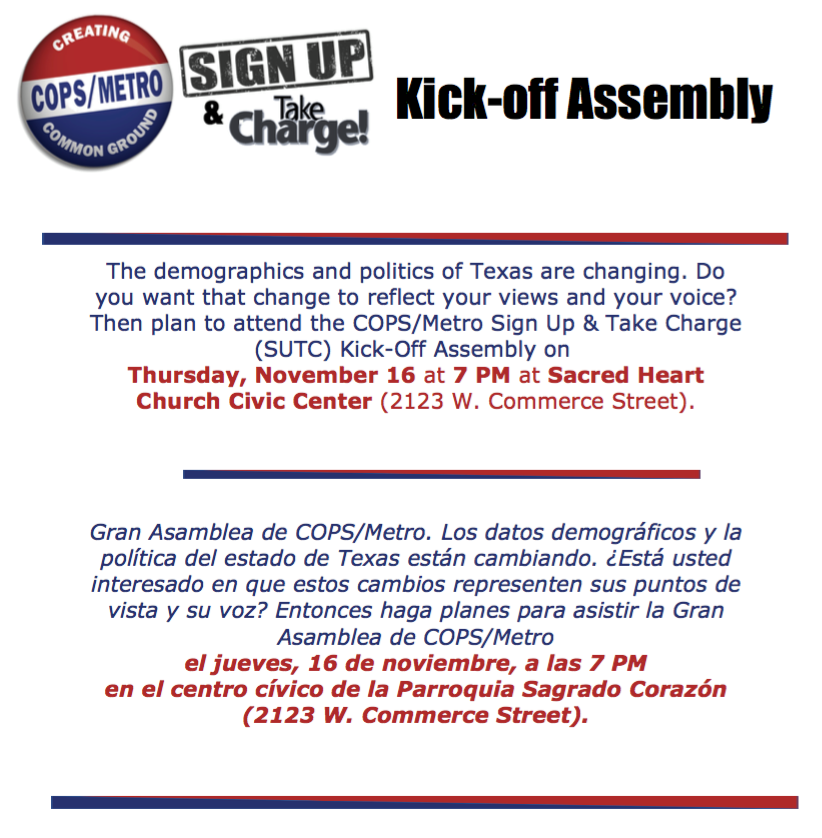 The demographics and politics of Texas are changing. Do you want that change to reflect your views and your voice? Then plan to attend the COPS/Metro Sign Up & Take Charge (SUTC) Kick-Off Assembly on Thursday, November 16, 2017 at 7 PM at Sacred Heart Church Civic Center (2123 W. Commerce Street; San Antonio 78207).

You are cordially invited to attend the Reviving the American Dream Economic Summit, Saturday, September 23, 2017, from 10:00 AM until 3:00 PM. Mr. Ernesto Cortés, Jr. will be conducting The Economy training session. Please RSVP to reserve your seat. 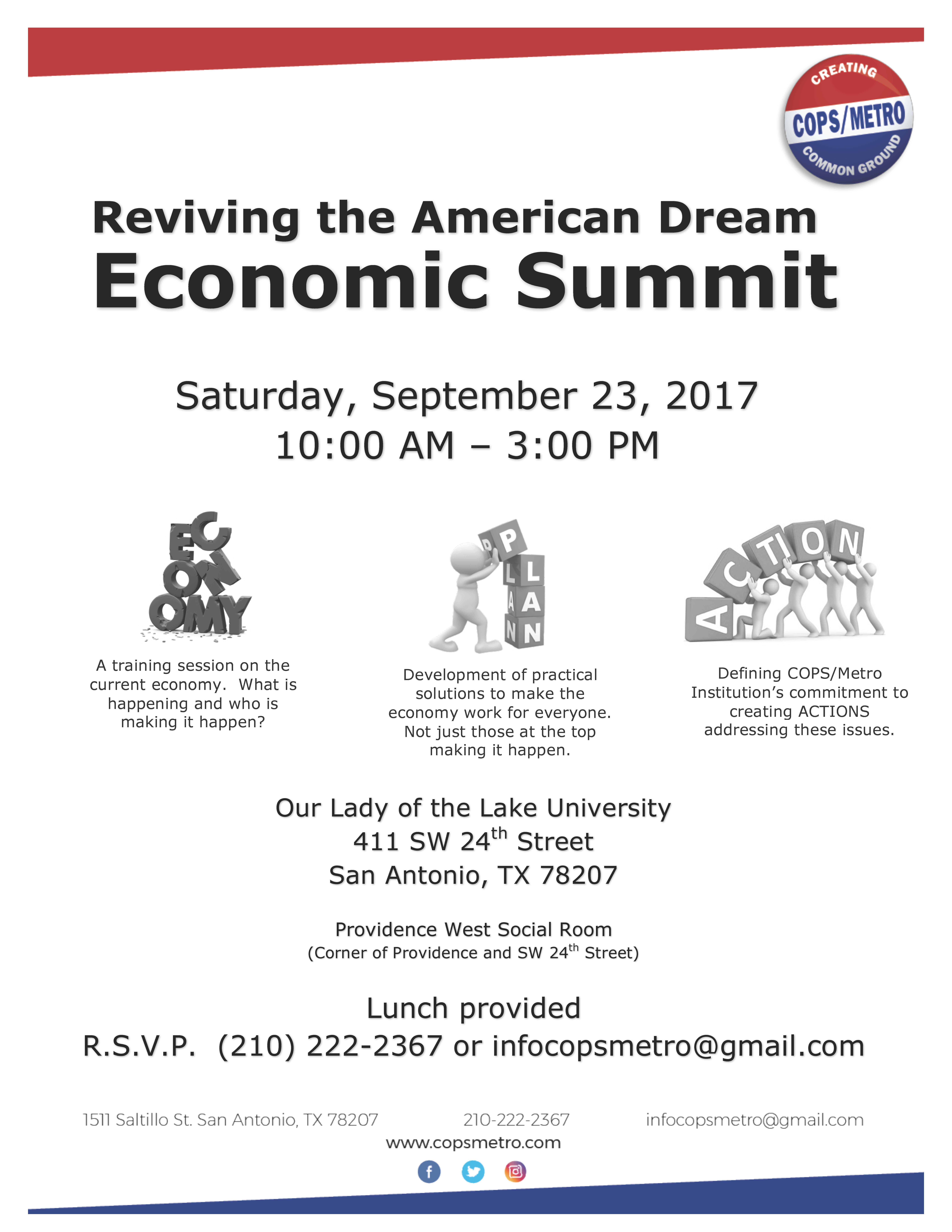 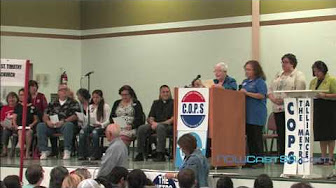 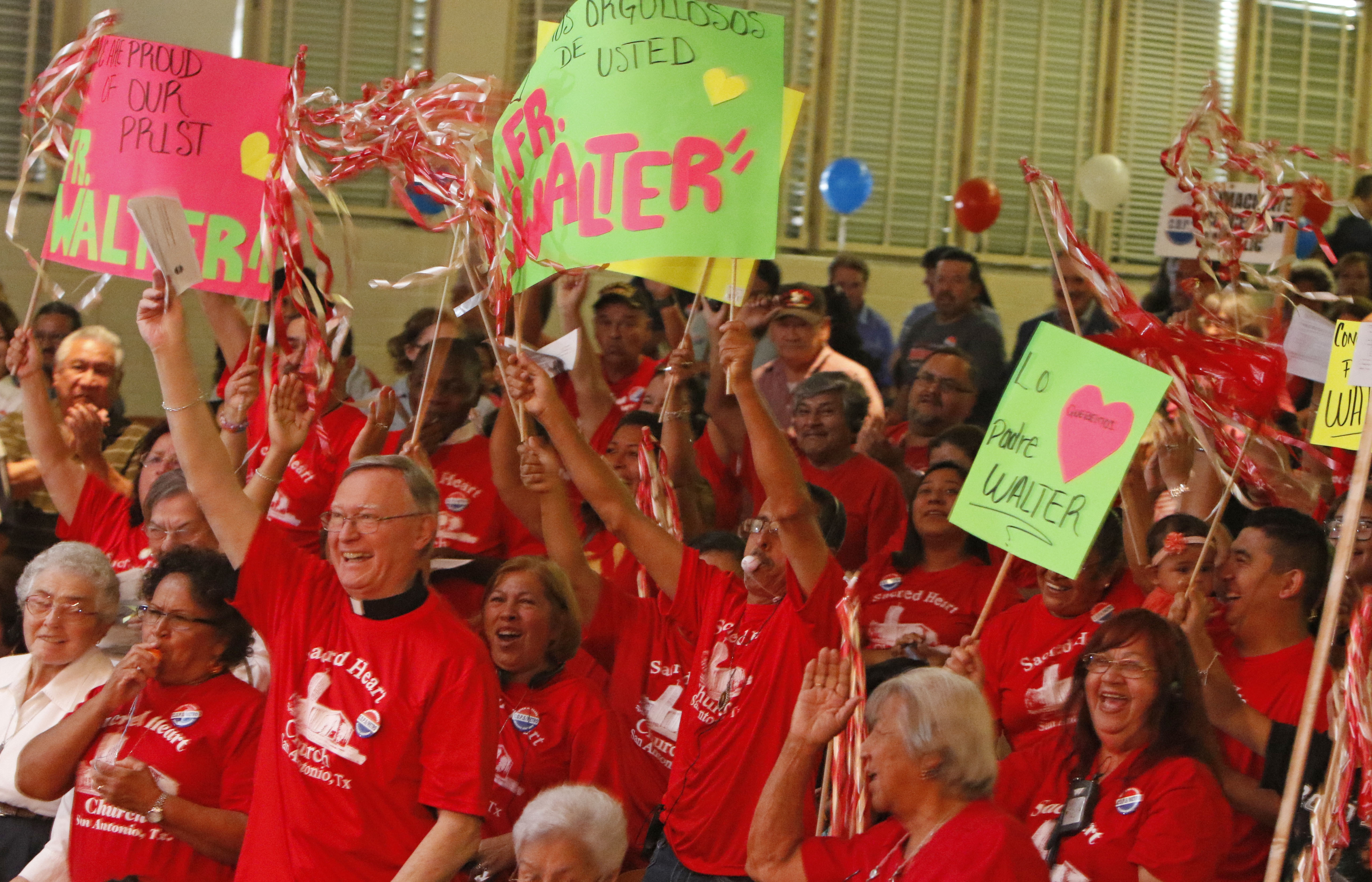 On Saturday, April 30th, 2016, over 1,000 COPS/Metro leaders from all over the city gathered at Edison High School's auditorium to honor their founding leaders, to celebrate their 40th Anniversary and to keep the pressure on elected officials to pay living wages to public sector workers.

Fr. Brian Christopher of Our Lady of Guadalupe Church brought delegates to their feet with a challenge to keep organizing for higher wages. "I hear a lot of people say that we church folk ought to leave economics aside, that we ought to stay out of politics, that we ought to stick with religion," said Fr. Christopher. "Well guess what? This is religion. If you want people to believe that they are children of God, then give them work that will pay enough to support their families.”

Chris Almendarez, a 19-year-old leader with Sacred Heart Church and a graduate of Brackenridge High School shared with the assembly that his mother works two SAISD jobs—from 6 AM to 4 PM in the school cafeteria, and from 4:30 PM to 10 PM in the school's sports complex.  He sees her only fifteen minutes a day between jobs.

"What gets me angry is to think of other children who are growing up without their mom or dad, who don't have support in doing homework, studying, and even making a meal," said Mr. Almendarez, who had to quit college in order to support his family. "SAISD Trustees, are you going to work with us to raise those wages and bring our parents home?"

Flanked by Superintendent Martinez and Trustees Guerrero, Hernandez and Valdez, SAISD Board President Patti Radle responded, "We are grateful to COPS/Metro that because of your involvement, we will be able to raise wages by 20% for our entry level employees this year. But we are not finished traveling together on the living wage. So we will be with you in the future to raise it to $13; we'd like to get it to $15, but we'll need to travel together, we'll need your help on this."

Bexar County Commissioners Paul Elizondo and Tommy Calvert also committed to continue raising wages in the county, agreeing to support raising wages to $14/hour for direct employees as well as raising wages for outsourced workers in this upcoming budget cycle.

Councilmembers Gonzales, Viagran, Trevino and Nirenberg also agreed to raise wages for city employees to $14/hour for the next fiscal year, and to follow the county's lead in establishing a wage floor for outsourced workers.

"Yes to both questions," said Mr. Nirenberg to Ms. Irene Lopez of Our Lady of Guadalupe. "And on the outsourced workers, we should have done that a long time ago."

Councilmembers also agreed to stabilize funding for Project Quest, a long-term workforce training strategy organized by COPS/Metro, by making it a line item in the city budget. 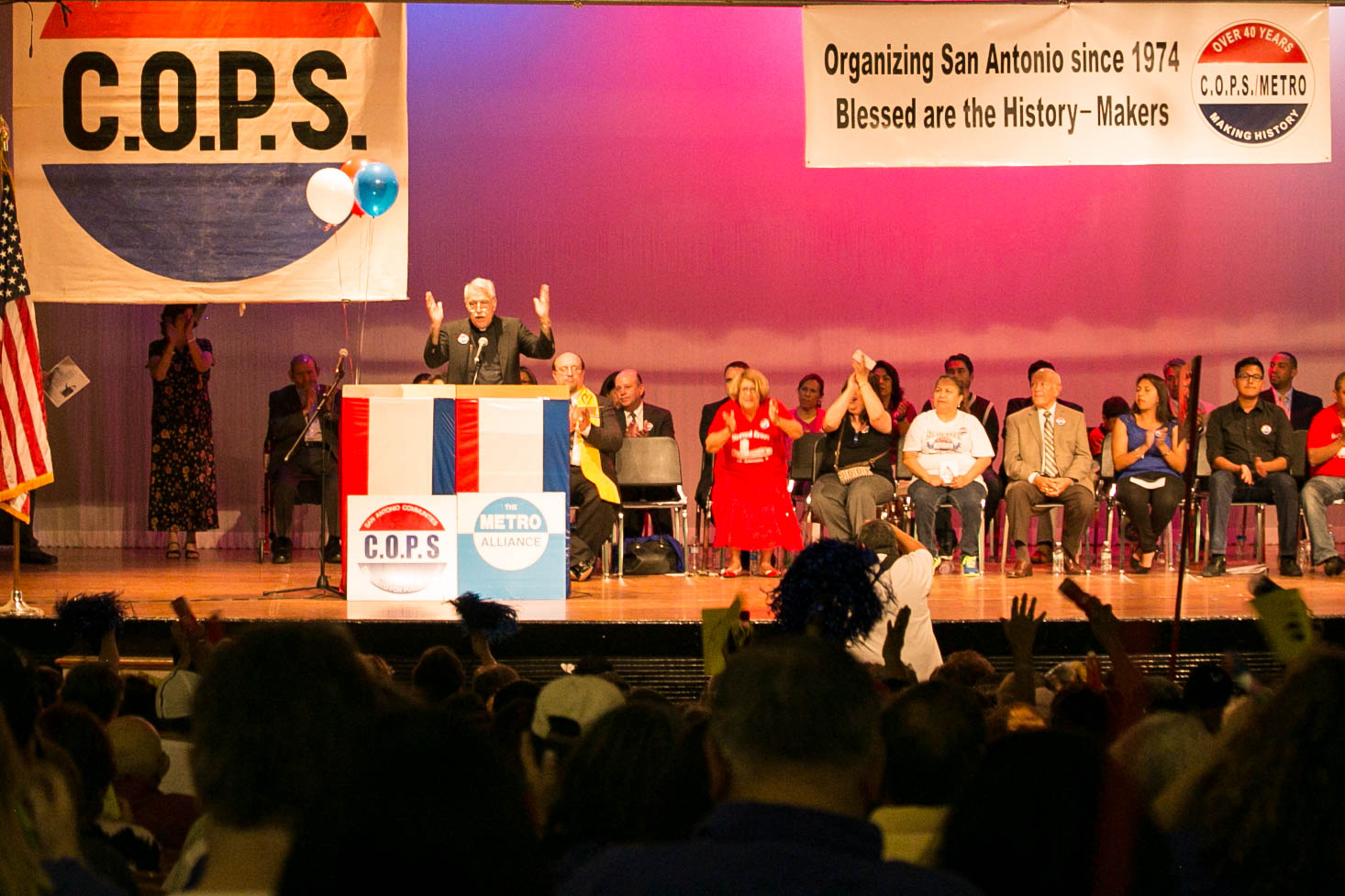 Fr. Michael DeGerolami, Pastor of St. Timothy Church called leaders to action. "If we are truly serious about living wages and combating predatory lending, then we need to train at least 100 leaders to do house meetings and civic academies on this issue. My parish will lead the first session in partnership with Catholic Charities and you are all invited to attend. COPS/Metro, are you ready to get to work?"

“A living wage is not an entitlement,” said Fr. Brian Christopher. “A living wage is a right. For 40 years, COPS/Metro has been doing an excellent job of demanding this justice, but we have got a lot more work to do. So let's keep the pressure on!"

Thanks to NOWCast SA, you can view a recording that was webcast during the event.

Inspired? Motivated? Want to get involved? Here are our next steps:

If you did fill out a green "next steps" card at Saturday’s action, let us know you plan to attend any of the meetings listed above by filling out this brief online form. 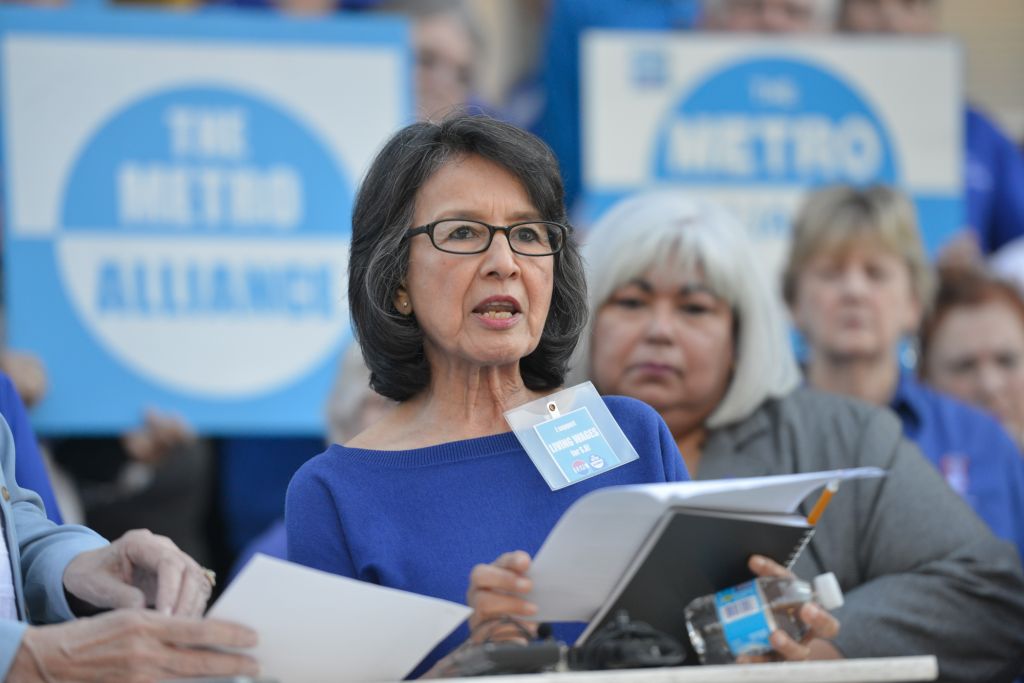 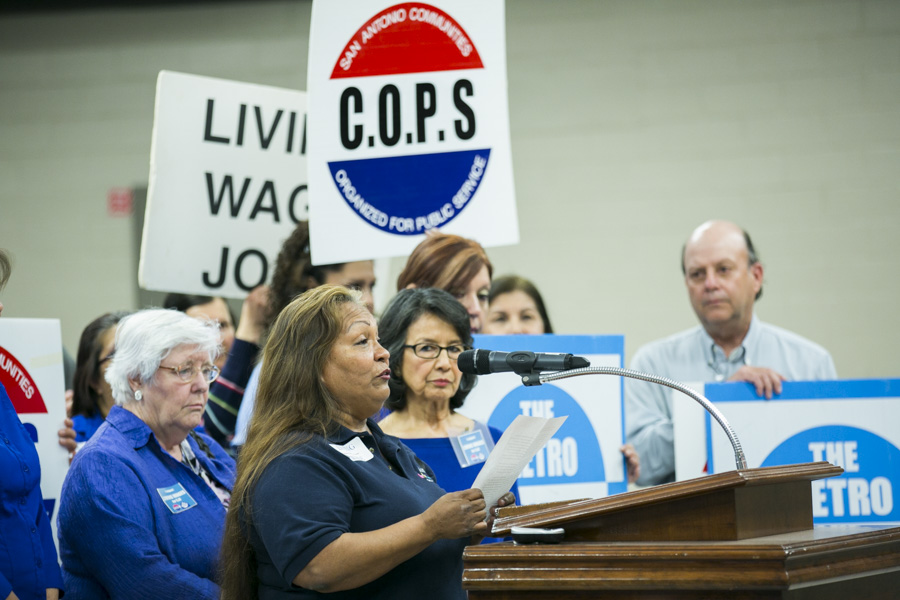 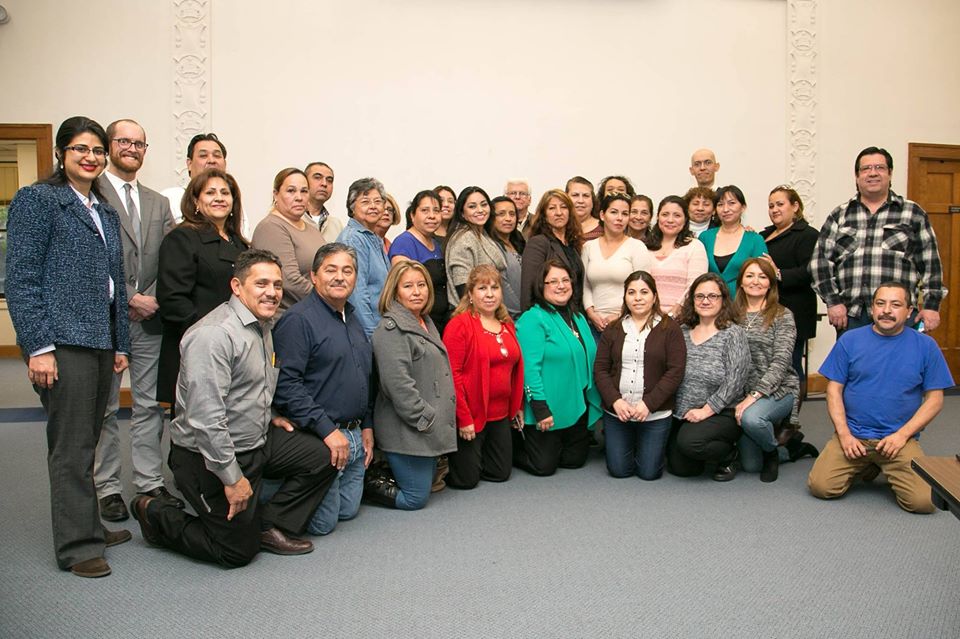